Today, the world largely relies on conventional energy sources—such as coal, oil and natural gas—to fuel everyday activities. In an effort to lower carbon dioxide emissions resulting from these methods, companies are working harder to manage their energy usage while also finding ways to rely on alternative energy for power.

The Home Depot is making it a priority to understand its energy footprint and find ways to make an impact.

“There’s a huge focus on the amount of electricity we use, and how we can continue using less electricity across stores,” says Christopher Berg, vice president of workforce operations, building services and energy management at The Home Depot.

We’ve made significant strides over the last five years. Since 2010, our U.S. stores have decreased electricity usage by 21 percent for a total reduction in energy use of 30 percent over 2004 levels. This was accomplished primarily through automation systems, variable-frequency drives (VFD) and lighting retrofits.

“Two years ago is when we really started to evaluate options in the alternative energy space and look for possibilities that would make sense for us,” explains Christopher. “Currently, we’re focused on three types of sustainable energies: fuel cells, wind and solar.”

Fuel cells produce about 85% of the energy that a store needs to operate, and in partnership with Bloom Energy, we are installing fuel cell technology at our stores. “Fuel cells use natural gas to generate electricity in a highly efficient manner—with a lot less carbon emissions,” describes Christopher.

After successful testing last year, more than 70 sites have been installed in California, Connecticut and New York stores. The plan is to expand to approximately 170 stores by 2016.

Our solar energy initiatives are set up off-site in Delaware and Massachusetts. Though these projects are not connected to stores in a physical way, the sites product electricity and feed it into the local grid. Christopher notes, “We partner with large, commercial-scale solar developers in the same market where we have stores.” The electricity output from the two developments is equal to the usage of approximately 10 stores.

Wind turbines require a lot of aerial space, but once set up, they are highly efficient. In 2016 The Home Depot will welcome a large-scale, off-site development that produces wind energy. “We have a bunch of stores in a Texas market that will be using power from these electric grids,” says Christopher. This 50-megawatt project will be fully functional by mid-next year and has the ability to create the electricity output equivalent to 90 stores.

As we continue to work with third parties to develop alternative energy projects, assessments will be made on what other alternative energy projects may be possible across the U.S. Through these sustainable initiatives, Home Depot is helping facilitate a significant amount of low and no emissions electricity production in markets where it otherwise wouldn’t be possible. 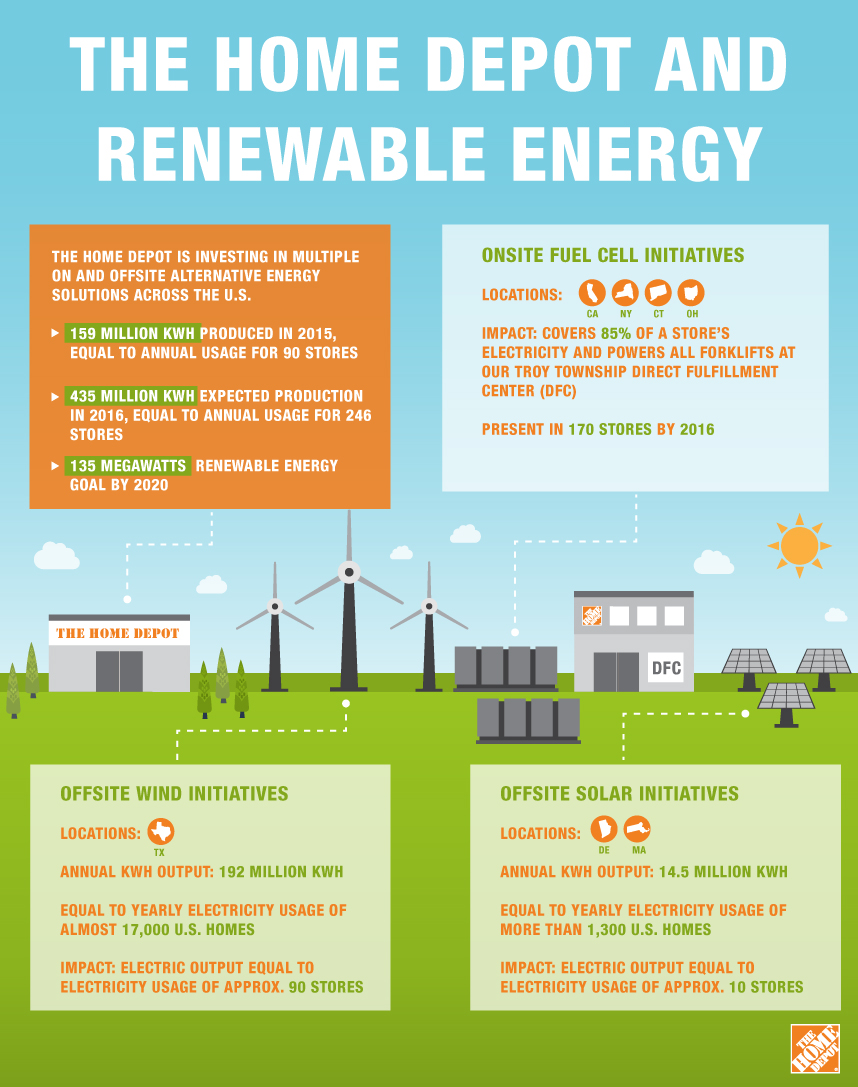 Rule Your Attic: Insulate Your Home to Save Energy and Stay Comfortable

Rule Your Attic: Insulate Your Home to Save Energy and Stay Comfortable

The Home Depot Joins RE100

The Home Depot Joins RE100

Circularity in Action: Our Commitment to Composting and Sustainability

Circularity in Action: Our Commitment to Composting and Sustainability

The Home Depot Reduced Carbon Emissions by More Than 127,000 Metric Tons in 2020; Commits to 100 Percent Renewable Electricity for Facilities by 2030

The Home Depot Reduced Carbon Emissions by More Than 127,000 Metric Tons in 2020; Commits to 100 Percent Renewable Electricity for Facilities by 2030