The American flag flies every day but there’s a special significance on Memorial Day. It reminds us of those who died serving our country. We honor those veterans’ sacrifices with respects paid to our flag, including caring and disposing of it properly.

For Jason Weldon, he took pride in the fact that the company he worked for had a flag replacement program, run by The Home Depot’s Military Appreciation Group (MAG). MAG operated a local drop-off box at the company Store Support Center in Atlanta. When a 2017 renovation required the removal of the main collection bin, Jason took it upon himself to collect the flags, taking old flags to a local Boy Scout troop for proper disposal.

“No one knows how it got there,” says Jason. “Neither MAG nor Corporate Security was aware of it when I found it.” 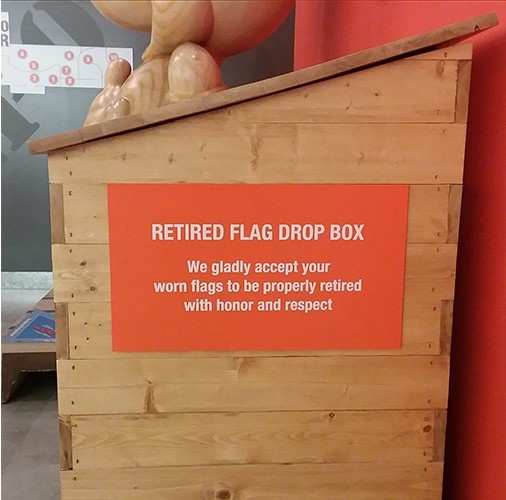 The first time Jason checked it, there were about 200 flags inside. He now visits the box twice a year; a recent visit yielded another 60 flags. To date, he’s helped to properly retire and dispose more than 300 flags.

Honor those who have served by taking the time to learn how to respectfully retire and dispose of a flag.

1. In a fire pit or safe, clear area, build a fire that is large and strong enough to completely incinerate the flag. (Be sure to follow your local fire codes and ordinances.)

2. Fold the soiled or worn-out flag into the traditional triangle shape. When finished, the blue field with stars should be the most visible section.

3. Being careful to not burn yourself, place the folded flag on the fire.

4. As the flag burns, take a moment to observe and respect it. Salute or recite the Pledge of Allegiance and conclude with a moment of silence to reflect on its symbolism.

5. Once the flag is completely burned and no material remains, you can extinguish the fire or allow it to burn out on its own. Following the ceremony, the ashes should be buried.

There are also other methods to consider as well, such as burying the flag in a place where others won’t walk over it or recycling flags made of synthetic materials. For those who would prefer to have someone else perform the disposal, organizations like the American Legion, Girl Scouts, and Boy Scouts of America all offer some form of flag retirement and ceremony.